Disclaimer: These essays presume you’ve seen the film in question. If you want to avoid spoilers, watch the movie first!

I’ll be honest: I’m watching Number Seventeen because it’s short. In fact, it’s the shortest of all Hitchcock films, clocking in at just over an hour.

I picked a short film because it’s a busy week for me. Today I’m celebrating my girlfriend’s birthday with her family, and tomorrow running up to Cleveland to pick up the final copies of my new calendar that was printed through my Kickstarter. Then Thursday we’re driving to Chicago for the Renegade Craft Fair, the debut of several new prints and my calendar, and my 40th birthday on Friday. I’ve got mixed feelings about this, my 40th birthday.

I don’t remember by 10th or 20th birthdays; for my 20th I was in my junior year at New York University and probably spent it with chinese takeout and Barry Lyndon (ah, dear, gorgeous, tedious Barry Lyndon). For myy 30th birthday I went all out; I rented a private space at a favorite bar, the now-closed Magnetic Fields. I invited everyone I knew, and like any birthday, I was happy with the people who showed up but disappointed with those who didn’t. I remember kind of ending a few friendships, because I felt like “If you can’t show up for my 30th birthday, wtf, man?” And who knows? On the one hand, it’s easy to get caught up in “I only turn 30 once, why weren’t you there??!!” On the other hand, birthdays are dumb and it’s too much pressure that we place on ourselves and our friends. No event, no moment is ever perfect, or if it is, it’s not through our own creation.

Still, we like to feel that people will show up for us, and that’s something I still struggle with. This year I was getting lost in the miasma of Who Will Come And Who Won’t And Why Doesn’t Anyone Like Me, when my girlfriend volunteered to plan the party for me. A weight had been lifted! I instantly felt better about turning 40. It was a lovely thought, and already the best birthday gift I’ve gotten in years. As for the birthday itself…well, let’s see how I’m feeling next week. 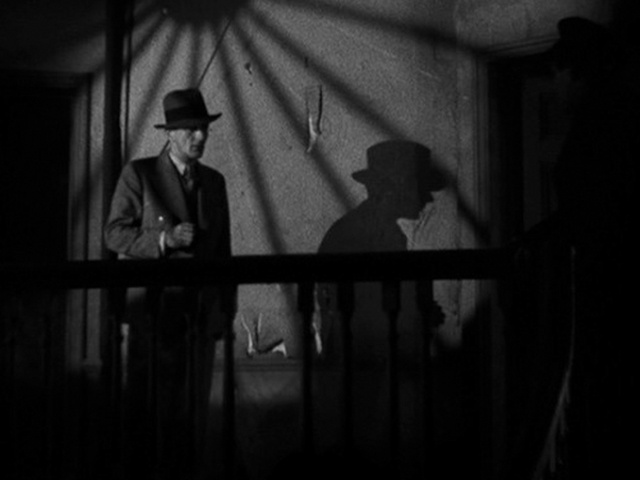 Hitchcock memorably kicks off Number Seventeen with a horror movie soundtrack that wouldn’t be out of place in a Universal monster movie. The music accompanies a tracking shot of dead leaves blowing across a sidewalk. Then a hat joins the leaves and a man rushes up to grab his hat as it lodges in the entryway of a mysterious old home. The camera moves in closer, crowding the man into the home as he notices a mysterious light inside and a sign that says “Rooms to let.” All in one shot so far! Then, after a quick cut to the “rooms for let” sign, the camera continues inside the house. The man strikes a match and follows a mystery man up the stairs, their two candles changing the shadows and casting horrors upon the wall until finally, when the two come face to face, the light from a passing train illuminates the fact that they’re standing over a dead body.

This all in a wordless, breathless five minutes (including the opening credits). The film alternates between this kind of fast-paced action and slower comedy. It’s based on a play about a couple who runs afoul of jewel thieves in a spooky old house, complete with lots of double-crosses and an overbearing cockney comic relief. Honestly, the plot makes little to no sense and after lots of fights and people being locked in rooms, it ends with a protracted chase on a runaway train.

It’s a cinematographer’s dream and a gaffer’s nightmare (a gaffer runs the electric and pland the lighting setups for a film). Almost all of the early shots have long, intricate light setups, scenes where a hallway is lit by a match or a lantern with dark shadows and changing light sources.

Hitchcock uses a multitude of strange angles, fast & slow motion, and quick cuts, many of them hallmarks of his German-inspired silent films. Yet in sound films they’re starting to seem dated and unnecessary.

In many ways, while Number Seventeen is undoubtedly a lesser trifle from the Master of Suspense, it seems like a missing link between the showboating damn-the-rules Hitchcock of the silent era, and the cunning precision of his later work. Just a few years later, a film like The Man Who Knew Too Much would employ almost none of these stylized tricks, instead relying on unseen trickery (matte paintings for the Royal Albert Hall sequence) and cutting & timing to create suspense.

Hitchcock was unhappy with the studio at this point in his career and was stuck with Number Seventeen, possibly as a punishment. Resisting the cloying performance by Leon M. Lion (who had produced and starred as the cockney Ben in the original hit play) Hitch and Alma turned the film into a satire of those overly convoluted “Mystery House” plays. At one point when the hero & heroine are tied to a railing that’s about to collapse, she even remarks “It’s like the pictures, isn’t it?” Yet while the plot might be hackwork, Hitchcock can’t help but create great cinema. While the dialogue scenes are little more than filmed plays, and the final denouement (who stole what and who was double-crossing who) deliberately makes no sense, Hitchcock is clearly enjoying himself. Even if the movie is made with a knowing wink he still creates some great scenes, including the opening shot, multiple fight scenes, and the final preposterous yet thoroughly enjoyable railway chase. 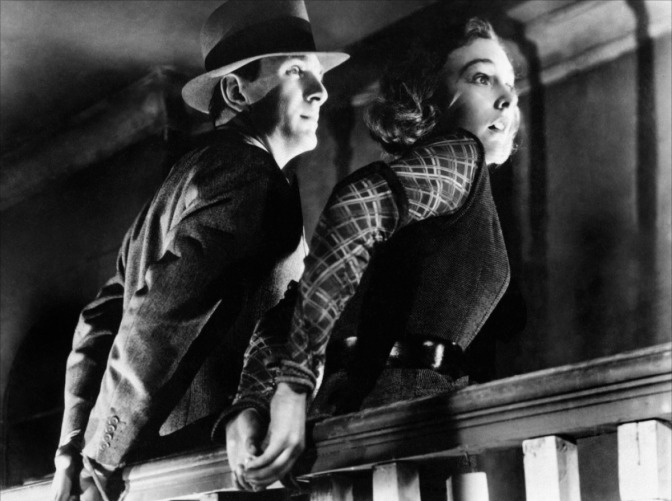 In several accounts, critics and historians talk about how the last section of the film makes extensive use of models, perhaps going off François Truffaut’s comment to that effect in Hitchcock/Truffaut. Yet the vast majority of the chase is filmed rather spectacularly on real trains. Many shots clearly take place onboard moving railway cars with daring stuntwork, mixed with convincing studio work for the main actors. The models are reserved for the final moments of the chase and subsequent crash of the train into a ferry, a scene that is blocked and shot with breathtaking precision. Yet despite some of the best model work of Hitchcock’s career, the miniatures never look real. Why is that?

The answer is something I learned as a teenager, when I was obsessed not just with Star Wars, but also with Industrial Light & Magic and special effects. ILM put out two gigantic coffee table books focusing on their special effects work and after years of looking through them at the local bookstore (they didn’t even have them at the library!) I finally got them for Christmas one year. In my quest to become Spielberg or George Lucas, I pored over these gigantic black tomes that revealed the craft of matte paintings, stop-motion animation, model work, and more. All virtually lost arts in the age of digital effects.

One of the books talked about model work in relation to fire and water. If you’re making a spaceship that’s moving through space, the model can be any size you want as long as the detail is visible. But if fire or water are going to be in your shot, then the smallest the model can be is 1/3 the size of the actual object. I remember the book demonstrated this with pictures of the Nazi fighter airplane that crashes into the tunnel in Indiana Jones and the Last Crusade. Any smaller than 1/3 and the way the fire and water move will reveal the size of the model. In Number Seventeen, the train cars look like what they probably were: toy trains falling into a bucket of water, rather than a gigantic railway car falling into the ocean.

The dominance of computer-based special effects in filmmaking has not just ruined a lot of these old techniques, but it’s made filmmaking worse. It’s made directors lazy, because they know that they can fix a problem in post as opposed to spending weeks planning out intricate sequences in advance. And models have to be tied to some kind of physical reality because you’re photographic an object; with computer generated environments, cameras can go anywhere at any time, regardless of weight, size, and believability.  What might once have been unthinkable onscreen is now everyday and everything is routine. Think about it, what was the last movie you saw in a theater that wowed you with spectacle? For me it was 2015’s Mad Max: Fury Road, a movie that used practical effects as much as possible, creating shots and angles that no computer technician would ever think of.

Hitchcock didn’t have the budget and technical equipment to make a movie like Fury Road, and I doubt he would have. But he would nonetheless appreciate the painstaking planning that went into the effort. He may have viewed Number Seventeen as a throwaway, but his detailed experiments with lighting and the final chase show that he was still working, still thinking, and still planning. What could have been an unwatchable creaky crime story in someone else’s hands, here turns into a quick-paced lark that’s far better than its reputations suggests.

Number Seventeen is not streaming on any services, but can be rented on Amazon or maybe rented from your library.

View all posts by mattbuchholz