Disclaimer: These essays presume you’ve seen the film in question. If you want to avoid spoilers, watch the movie first!

Champagne is one of those unknown Hitchcocks. No one talks about it or makes a case for it being an underrated classic. It’s just there, taking up space on his list of titles. Still I try to go into all of these movies with an open mind, and it’s been fun to do so; fun to discover that Waltzes from Vienna is far from his worst film, fun to discover the delight that is The Farmer’s Wife, and fun to see new brilliance in films like Family Plot.

Yet Champagne is worthy of its status. It’s not bad and it’s not good. It has some great moments, some bad moments, and a lot in between. It’s marking time, an assignment for Hitchcock. It’s a shrug.

But I vowed to write in detail about each of these damned movies, so buckle up, buttercup.

Betsy Balfour plays the heroine of Champagne, introduced crashing a seaplane in an attempt to get onboard a transatlantic ocean liner. She’s trying to get to her boyfriend (Jean Bradlin) whom her tycoon father (Hitchcock favorite Gordon Harker) has forbidden her to see. The two have a rough courtship while a mystery man (Ferdinand von Altern) stalks her from afar, and the duo breaks up. They briefly reconcile in Paris, but he soon takes offense at her capricious nature and leaves. Meanwhile Harker has a plan of his own: he pretends to have gone broke to make Balfour understand the value of money. It’s a cruel trick as she tries to cook and find work while he sneaks out to continue eating at fine restaurants. Eventually she gets a job at a cabaret where she gives flowers to men in evening dress (I think maybe it’s implied that there’s a sexual component to the job too, but it’s unclear). She sees Bradlin again, who is apoplectic at the sight of her in such a place. Finally, it’s all resolved as we find out that the mystery man is a friend of her father’s, sent to watch over her, and Harker comes clean about his dirty trick. Balfour forgives everyone and agrees to marry Bradlin.

Proving that studio heads have been making silly decisions since the start of moving pictures, Hitchcock was enlisted to direct Champagne with just the title: someone wanted to capitalize on the craze for the french drink and name a film after it. Hitchcock and co-writer Eliot Stannard concocted an idea about a young girl who works in a French Champagne factory, boxing up bottles and dreaming of seeing where they end up. She gets her wish and experiences high society, then realizes there’s no place like home. The last scene would feature her back at the bottling plant, shaking her head over all the misery these bottles would cause.

That’s a pretty decent story, with a clear and consistent narrative. But when the studio hired renowned light comedienne Betsy Balfour, the story had to be altered to suit her. Instead of a carefully plotted morality tale, Hitchcock and Stannard literally made it up as they went along, with tangential references to champagne sprinkled throughout the movie (Harker is supposed to own a champagne factory but he lives in New York City? Bizarre).

Maybe the most fascinating moment of the film comes early on, when Harker sends a shipboard telegram to his daughter warning her not to marry her beau. Harker believes him to be only after the family fortune, and is upset that his daughter risked her life to join him on the cruise. The telegram reads: “DOES LIFE MEAN NOTHING TO YOU THAT YOU RISK IT FOR THAT CAKE HOUND? YOUR BOULEVARD SHEIK IS ONLY AFTER MY BANK ROLE.” 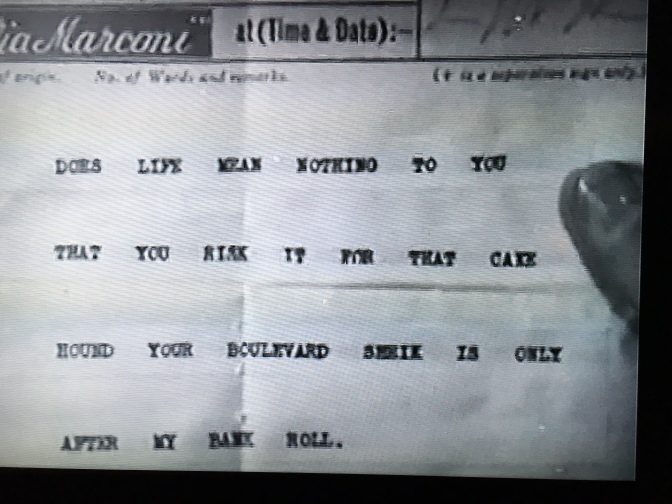 There’s a lot to unpack in this wildly overwritten telegram. “Boulevard Sheik” is an excellent moniker, and deserves to be the name of an indie band if ever I heard one (“I saw Boulevard Sheik open up for Tame Impala last year at Coachella”). Yet it’s fairly clear to see what it means from the context of the telegram and film, someone who believes themselves to be better than they are, with “Sheik” in 1920s standing in for a general Lothario (yes, an antiquated and racist term).

I rewound the film several times, and googled cake hound, which was mainly useless as you just get photos like THIS. Finally I started to find some references to it, although mainly in relation to the film itself. It’s also different from “Cake Eater,” which doesn’t apply as that term refers to spoiled or rich kids, denoting that the “eater” is of wealthier or upper class means. Which is the opposite of the situation in the film.

As best I can tell, it’s a shortening of the colloquial “Bride-cake hound,” which refers to a young man desperate to marry, someone who is a “hound” for the bridecake. There might be the hint of a sexual connotation here as well. Still, it’s by far the most baffling slang I’ve ever seen, and it would appear to be uncommon even in 1920s Britain. Perhaps more evidence that Hitchcock and Stannard were making it up to amuse themselves as they went along.

The signature moment of the film is the opening and closing shots, each a point of view of a man drinking a glass of champagne. As the bottom of the glass tips up toward the viewer, we see a scene magnified through the round bottom of the glass. In the opening we see an establishing shipboard scene and in the closing, a shot of the young couple embracing. It’s a great visual trick, one that Hitchcock had to construct a special over-sized glass for, and one that his cinematographer did not believe would work. Yet Hitch, ever the technical expert, was correct: it works beautifully.

Champagne has its share of technical wizardry, like some expertly staged scenes aboard a roiling ship during a storm with characters staggering from side to side, and multiple dissolves to shown seasickness. More than most of his films, Hitchcock pays tremendous attention to the details here, perhaps because the rest of the film bored him so. There’s an ingenious sequence showing the rough handling of a roasted chicken in a kitchen contrasted with its lovely appearance tableside in the restaurant, or a good comedic bit of business when Harker orders at a restaurant and his order is conveyed through four different waiters.

Hitch even engages in some expert rug-pulling in a scene where Balfour is having a drink with the mysterious man, who’s constantly presented as a lecherous character. We see him leading her to an alcove then roughly forcing himself on her while she struggles, only to see in another shot that the whole thing was a dream. It’s a standard trope now (the scene that turns out to be a dream or all in someone’s head), but it was a new concept in 1928 and Hitchcock executes it perfectly.

This sequence is shocking and carries far more weight than the rest of the film. Balfour’s interactions with von Alten are always tinged with uneasiness but here Hitchcock portrays the true horror of a woman being assaulted. It’s a hint of a better, more compelling film as Hitch explores the menace that men present to women. For while Balfour has an independent spirit for most of the film, it’s here that she realizes she’s truly at the mercy of the men around her and it’s terrifying. An earlier scene where she’s looked up and down by lecherous booking agents trying to find her a job drives home the same point: women are at the mercy of powerful men.

Otherwise the sexual politics of the film are tedious and of their time. Case in point: Bradlin as the jilted lover is frequenting the cabaret where he discovers Balfour working, and is horrified that she’s working there. The message is clear: men can visit this place but women cannot. There’s a brief stab at trying to make the Cabaret seem like a den of sexual perversity when Balfour bumps into two women dancing together, but that’s about it. Hitchcock has his usual jabs at deflating the pretensions of high society (a two-faced maitre’d, the hypocrisy of her father), but it doesn’t add up to much. Many of these themes of travel, romance, and mysterious strangers would come back in the far superior Rich and Strange (1931) which more successfully merges comedy and social satire.

It’s November 4 as I write this and I’m trying not to worry about the election. I spent about a thousand words trying to write about Hillary Clinton and the sexism she faces on a daily basis, and realized I’m not up to the task. I don’t know what it’s like to be a woman, to feel the fear that Balfour does in Champagne or to fight for everything you’ve ever had.

But I know about empathy. Empathy makes us better people and makes us better leaders, and the best way to gain empathy is to have strived for something. Strived against prejudice, discrimination, judgements, or anything.

In nearly all of his films, Hitchcock has empathy. Empathy for his heroes and surprising empathy for his villains too. His is an often-generous worldview that takes in everyone and makes some surprising stops along the way.

Hillary Clinton has empathy. You can see it when she talks about women’s rights and her steely facade drops to reveal the woman underneath, a woman who fought to be taken seriously in a world who did and still does not want women to make noise.

Donald Trump has no empathy. He has no sense of what life is like for anyone but himself. He has never suffered, never worked hard, and never been discriminated against for anything. As a rich white man, he has no barriers or impediments and has used those gifts to build a morally and financially bankrupt world.

Empathy is important for art and for life. Sometimes empathy feels like all we have.

Champagne is not streaming on any services, but can be rented on Amazon or iTunes, or rented from your library.

View all posts by mattbuchholz